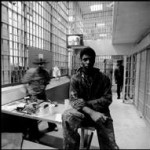 I wasn’t on the floor more than 10 minutes when someone asked “did I want to play cards?” Well, sure. (really the only appropriate answer). They dealt me a hand while I tried to figure out whether it was stud or draw or whatever. It turned out to be “whatever”, and I spent about 10 minutes trying to figure out which whatever game I was playing. I wasn’t getting very far when I realized that I couldn’t even make semi-educated bluffs. I was in a completely different league.

The rest of the day was fairly slow, but later, in the evening, there was a trial.

There were opening arguments and the prosecuting and defense attorneys introduced themselves. There were motions to suppress and motions in limine, abstractions, abuse of process, overt acts and acts that I really didn’t comprehend. What it boiled down to though, was that a guy from our floor was caught holding hands through the bars with one of the transvestites in the adjoining cell block. The court was convened to decide his guilt or innocence, and, should there be a conviction, the appropriate punishment for holding hands in a public area of the cellblock with a transvestite.

I recalled my roomate’s warning. “If you plan on taking a shower, make sure nobody else is up there.” And then something about “holes in the wall”. Holes in the wall were considered okay, as long as there were no witnesses. (Apparently, though, holding hands wasn’t.)

Though his defense was brilliant, in the end, the guy from our floor was found guilty and sentenced to death. The trial had taken several hours, the verdict about 5 minutes and the sentencing was immediate. I’m thinking, “Shit!” Would they hang the guy? knife him? Throw him off the tier? These thoughts were going through my mind when the judge added, “sentence to be suspended, subject to immediate execution should there be a future infraction.”

At that point, the cellblock was starting to resemble a giant game of Ouist, and I realized I should probably be taking copius notes.

6 thoughts on “A day in the Tombs”