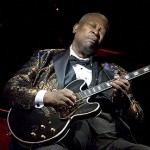 Not that he’d ever remember this particular donkey, but he sure made an impact on me.

Back during the summer of ’69 I was living in a seventh floor walkup on Broadway on Manhatten’s upper west side. One of my roommates was playing bass with a group called McKendree Spring and they had a 10 or 15 week straight gig at the Bitter End. I almost never saw him; I worked days and he worked nights. When I got up, he’d be asleep, if he was even home.

Occasionally, on weekends I’d take the train downtown to catch his act. Apparently, B.B. King had a longterm gig across the street at the Village Vanguard (it might’ve been the Village Gate – my memory fails me). As the weeks went by, my friend Tucker had been taking in B.B.’s act after he finished his last set and the two musicians became friendly. I was down at the Bitter End watching Tucker on this particular weekend. The other act at the Bitter End was either Rick Nelson or the Everly Brothers, I forget, but I hung out and by 1:00 am, Tucker was done and we walked across the street to see B.B.

We went in through the back musician’s entrance and walked down the hall past a few dressing rooms. Tuck knocked on one, and the door opened and there stood B.B. King, in the flesh.

I pretty much gulped and said “h-h-hi…” (Tucker had warned me not to mention that I played guitar or had even the slightest knowledge of the blues so that I wouldn’t embarrass him.) I kept mum and we made small talk for awhile in the half hour or so before it was time for B.B. to go on. There were two older women hanging out in the dressing room too (I was under 20, so “older women” could encompass quite a span). At one point the small talk turned to relationships with women, and B.B. had a lot to say on that subject. What I remember these 30+ years later, was his regret about being unable to keep a marriage together due to all the time he had to spend on the road. “If I could turn all this in & trade it for one lasting relationship, I’d do it in a heartbeat”, he rued. I think he said he’d been married about six times.

Eventually, it was time for him to get ready for his set and he said, “you guys stayin’?”.

We were, and he had a stage front table ready for us. When we walked to our table, a big-band type of group called Lighthouse was finishing up. We took our seats and a couple of tall beers showed up at the table courtesy of B.B. I don’t think I’d ever had an upfront seat like that to a musician the calibre of B.B. King and it was pretty much awesome. I watched every note he played. I’d have to say he made love to Lucille’s neck, that’s how B.B. plays. Nothing else could quite describe it.

When the evening was over, Tuck and I were pretty drunk and were pretty much the last people to leave the club. We walked a few blocks to an apartment where there was a party going on. It wasn’t a very memorable party, or perhaps my memory wasn’t too memorable that night. I have a mental image of the two of us in the subway at 5:00 am, drunk & stoned, Tucker sitting on his hardshell base case, me standing on the platform, waiting for the train.

A year or two later I was back at college and B.B. came to perform at our little college ampitheater. Afterwards a few of us asked him over to hang out at one of the apartments. A little later, there was the great B.B. King, sitting on a thrift store overstuffed chair answering questions from a few college students. I told him I’d met him back at the Vanguard and he didn’t remember until I mentioned Tucker.

“Tuck didn’t want me to say I played guitar or knew anything about the blues, which I don’t, I’m just a big fan.”

“Well, if you said something about guitar playing, then you would’ve had to play for me.”

“Don’ matter. I’m out there every night playing for everyone else. I gotta hear people playing for me sometimes.”

About this time a reader might be wondering, what’s wrong with this picture? Pop stars (and in 1971, B.B. was one of the biggest) are supposed to be egocentric, distant, and generally, if reports are to be believed, fairly nasty people. After all they didn’t make it to those lofty positions by being “nice”.

The B.B. I’m talking about here seems….well, kinda “down home”, in this brief snapshot. In my little experience, yeah, he’s a down home guy. Someone who works incredibly hard, is genuinely talented, and who adores his fans to the same extent that they adore him. He could be anybody’s grandfather. He just happens to be a legend as well.

Kind of a tough act to follow, I’d say. Even these days. Maybe especially these days.